Dilma Rousseff, President of the Republic of Brazil, was Guest of Honour at the opening of the 81st General Assembly of UIC, the worldwide railway association which celebrates its 90th anniversary this year. The President of Brazil was welcomed at UIC Headquarters in Paris with addresses by Satoshi Seino, Chairman of UIC, Jean-Pierre Loubinoux, UIC Director General and Guilherme Quintella, Chairman of the UIC Latin-American Region.

Whilst addressing the heads of the world’s railways gathered at UIC, President Dilma Rousseff congratulated participants on the 90-year anniversary of the railway institution. As for her own country, she stressed: “the fact is that Brazil has an unbalanced transportation matrix. A continental country like Brazil cannot be fundamentally connected by highways. There should be a way of being able to articulate different modes: highways, waterways and railways.” 2007 was a very important year to recognise the importance of the rail system, as well as to reform it and rebuild it. Important steps were the launch of an Investment Plan for Railways which was the PAC (Growth Acceleration Program) with 5,000 km and in 2012 the launch of EPL – Enterprise Planning and Logistics – responsible for thinking and planning a modal integration of the Brazilian port system. “It will help build the next challenge, 10,000 km of railways.” She described the current project saying that “10,000 km of railways are too little for Brazil. We are still at the early stage which basically consists of freight”… and “as for passengers, a bidding process will be released on 13 August for the choice of the high-speed train technology and operator…” adding that “there is also a real need for light rail systems.”

About UIC’s role, President Dilma Rousseff stressed: “I believe that a great dialogue is to be established with Brazil, which will support its members’ opportunities, will enable stability and security for investments, and will ensure the conditions necessary to Brazil not only to structure its transportation system capable of fitting its challenges for the 21th century, but rather more to allow its people to have more efficient transportation, either for companies with regard to freight – where Brazil is a major producer of food, minerals, energy (oil) and manufacturing, and with regard to passengers.”

And in conclusion “I believe that this partnership between Brazil and UIC has everything to yield strong results” and “I am sure that due to the size and importance of UIC, our interests coincide and converge towards a future of opportunities.”

The assembly was also attended by Guest of Honour Mr Jozef Szabo, Administrator of the Federal Railroad Administration (FRA) at the US Government Department of Transportation, who was present the previous day at the UIC High-Level Round Table marking the UIC anniversary.

Satoshi Seino warmly thanked all UIC members for their permanent and effective support and cooperation during the four-year mandate of East Japan Railway as Chair railway of UIC, first with Yoshio Ishida since March 2009 followed by Mr Seino to complete the mandate. Satoshi Seino and East Japan Railway were thanked in particular on behalf of the entire railway community for their highly appreciated action at the head of UIC Governance during the last four years.

In this introductory address, Vladimir Yakunin warmly thanked his predecessors and all members of UIC for the trust and support for his nomination as Chairman “of the world’s most respected railway organisation – UIC.” He stressed that “the senior status of the members of the General Assembly shows how important it is to have a coordinated policy and specific rules for economic, technical, technological, and operational aspects of rail transport operations in the modern context of structural changes and reorganization of the railways in many regions of the world” and “the growing requirements for sustainable development, safety and energy efficiency are leading to an increase in technical and operational standards. We are seeing a real renaissance of railways, linked with the growing understanding of the efficiency and potential of rail transport”…

Vladimir Yakunin sees it among UIC’s top priorities “to strengthen its global status, strengthen the authority of the Union, increase its recognition in the international transport and economic community and ensure its maximum effectiveness for UIC member companies.” The progress in UIC’s work should be geared towards three principles: Involvement, Integration, Innovation, and on the basis of these principles, focused on the following strategic areas:

“participating in the creation of global transport policy and a united view of the world’s railways,

creating and implementing harmonised IT systems,

reducing the negative impact of rail transport on the environment.”

The key issues for UIC in the next period will include train safety and efficiency, quality and certification of railway products, and a very important objective will be the development of global transport corridors, in all regions of the world.

Finally “the development of UIC should proceed on the basis of the transparency of all processes and active cooperation, not only within the Union but also with other international organisations.”

UIC Director General Jean-Pierre Loubinoux reported to the General Assembly on the progress of cooperation activities managed and coordinated by UIC since the previous assembly in Philadelphia. As an example over the last four-year term, UIC has signed 30 international agreements or MoUs, organised 200 conferences and workshops in 25 countries with a total of 50,000 participants, managed the running of 100 working groups, published 3,000 articles on UIC’s work in 200 editions of ‘UIC e-News’ sent to 4,000 readers, and registered 65,000 hits in average every month on the UIC website.

A report was given on the main activities completed in particular in the fields of Standardisation (creation of the Standardisation Platform as a new standardisation body) and Research (International Railway Research Board chaired by Boris Lapidus, Director General VNIIZhT, Russia). The UIC Director General also informed participants about appointments within UIC working bodies: Michele Elia, from RFI, Italy, as Chairman of the UIC Rail System Forum, Willy Bontick, SNCB, Chairman of UIC Environment, Economics and Sustainability Platform, Peter Kleinschuster, from ÖBB, Austria, as Chairman of the Safety Platform, Radib Mehta, Indian Railways, as Vice Chairman of the Security Platform. In UIC HQ Thierry Bera succeeds Marie-Eve Lim as Finance Director. Marie-Eve Lim and Jean-Pierre Lehman, Legal and HR Director, who are retiring by the end of this year were warmly thanked.

Members of the General Assembly were informed on the progress of activities and implementation of the respective actions plans in Africa, Asia, North America and Latin America, Europe and Middle-East. 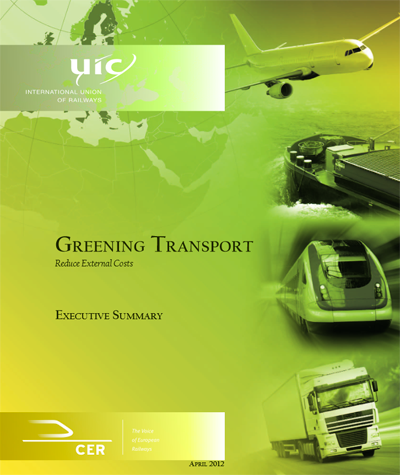