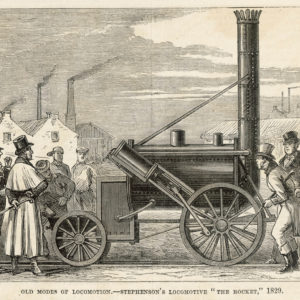 The “Rocket” locomotive by George Stephenson reaches 50km/h. Since the origin of railways in Europe during the Industrial Revolution at the beginning of the 19th Century, the speed of passengers trains was an essential argument to compete.

Railways were conceived in the first half of the 19th century, mainly (though not strictly) in the industrialised countries of the time and in a number of overseas territories controlled
by colonial powers. Consequently, it was on a national basis that governments were concerned with promoting what from the outset was clearly a means of mass passenger and freight transport for the future, still for the most part in the hands of private companies. The construction of railway networks was soon considered by the governments of various countries not only as a factor of economic growth but also as a facilitator of geographic and national unity. It was against this backdrop that the railways were established and developed in Europe, particularly in Great Britain, France (and all their overseas territories), Belgium, Germany, Italy, as well as the United States, Canada and Asia.