1882 Conference for the Technical Unity of railways 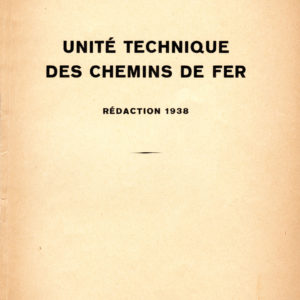 In August 1882, following the inauguration of the Saint-Gothard Railway which so clearly illustrated the railways’ international calling, the Swiss Federal Council invited the governments from the adjoining states to an international conference of experts on the technical unity of railways. On 21 October 1882, the state representatives signed a protocol ensuring that the rolling stock in compliance with the established standards could circulate on the networks of the member states.
This first conference for the technical unity of railways was followed by two others in 1886 and 1907 to address a range of technical issues such as track gauge, loading gauges, methods for closing wagons, rolling stock standards such as buffers and couplings and ease of access of customs officers to freight wagons, etc.
The Technical Unity constitutes the basis for the standardisation of railways in Europe and its measures – for example track gauge and loading gauges for vehicles operating in international traffic – also apply today to a number of railways across the world.