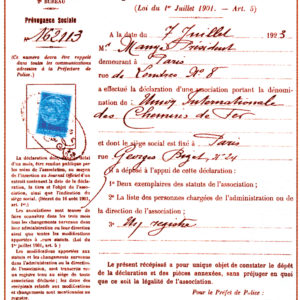 The International Union of Railways – the nascent UIC – was composed of three management bodies: a General Assembly, an Executive Board comprising 12 members and the chairman (whose mandate began the same day), and a permanent general secretariat based in Paris. At the proposal of the British delegate, Alfred Mange was appointed chairman and the three vice-chairmanships were given to Germany, Italy and the United Kingdom. Five permanent committees were also formed (Passenger, Freight, Accounts and Exchange, Rolling Stock Exchange and Technical Issues). The number of votes each member had at the General Assembly varied according to a system of degressive proportionality (ranging from 13 votes for over 50 000 kilometres to one vote for under 1000 kilometres), with networks from the same state allowed to split the votes due to them as they wished. The running costs were covered by a membership fee determined in accordance with the number of votes.

UIC did not work according to the principle of unanimity, which governed the two railway treaties then in force (the Bern Convention and the Technical Unity of Railways). Any decision had to be passed with a four-fifths majority and not give rise to subsequent opposition of 10% or more of the total number of UIC votes. The decisions passed were obligatory in nature following validation by all the governments in those areas where members were required to obtain government approval. UIC was therefore politically and technically autonomous, whilst remaining bound to the laws and treaties. The statutes were adopted in 1922 by 51 administrations from 29 countries in Europe and Asia. Various other countries and networks soon joined, such as the railways of Finland, Spain, Portugal, China, the Middle-East and North Africa, as well as Compagnie Internationale des Wagons-Lits. The Executive Board held its first formal meeting in December 1922 and one of its initial decisions, before being ratified by the General Assembly in October 1923, was the provisional admission of the Union of Soviet Socialist Republics (USSR). The five (technical) committees equally met for the first time in December 1922. At the Executive Board’s second meeting in autumn 1923, the request by the Chinese railways for the word “European” to be replaced by “international” in the statutes was granted. This set UIC on the road towards universality – slow to start, but gradually gaining pace, and which proved increasingly to be one of UIC’s core assets. UIC seeks to further the unity of its members whilst simultaneously honouring their diversity.

In July 1923, the International Union of Railways (UIC) was officially pronounced an association formed in accordance with the French law of 1901.