1963 Inauguration of the actual UIC HQ 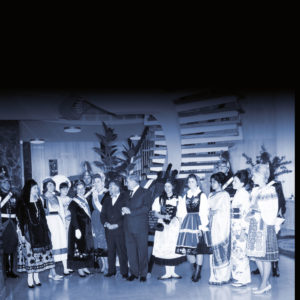 On 20 September 1960, the chairman of the German Railways Heinz Maria Oeftering, who had succeeded Louis Armand as UIC chairman, laid the foundation stone of the new building, accompanied by the then SNCF chairman André Ségalat. Construction of the new headquarters was part-financed by loans from 11 railways, and a number of networks offered contributions such as fixtures and works of art to adorn the building. The new headquarters were inaugurated on 29 May 1963 in the presence of UIC chairman Hugo Gschwind from the Swiss Federal Railways and Louis Armand, who had since become secretary-general.

Four spacious congress areas and a dozen or so meeting rooms of varying sizes enable conferences and professional events to be staged for 10 – 290 participants by offering the range of technical facilities essential nowadays for international gatherings (sound system, video projectors, videoconferencing, consecutive or simultaneous interpreting and catering). The three main meeting rooms are named after figures who wielded decisive influence in the development of the railways: Englishman George Stephenson, considered the inventor of the steam locomotive, German economist Friedrich List and Frenchman Louis Armand, one of the first to envisage the regeneration of rail transport in the 21st century.