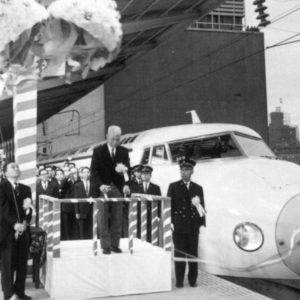 The advantages of high speed rail operations were first identified during the period prior to the Second World War, in particular in the light of the technical progress made in the areas of electric traction and aerodynamics. Following further developments in electrical supply and traction during the 1950s (it is worth mentioning the world rail speed records broken by SNCF on France’s south-west line), the idea of operating genuine “high speed trains” came to fruition when the Tokaido Shinkansen “bullet trains” entered service in October 1964 on the line linking Tokyo and Osaka, enabling the 515 km distance to be travelled at 210 km/hr. Japanese engineer Hideo Shima can be credited with this particularly important development in the history of modern railways. The success of the Tokaido Shinkansen, at a time of rapid growth in the automobile and air transport industry, demonstrated that railways could once again seriously rival their competitors in achieving the mobility desired by society.