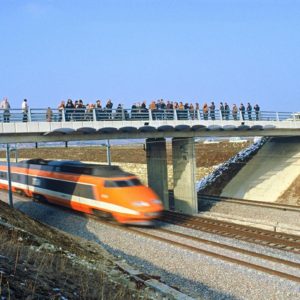 In 1981, the TGV Sud-Est was opened on the new Paris-Lyon line, covering 417 km and operating at speeds of up to 270 km/hr. It was followed by the TGV Atlantique (1989 – 1990), travelling at 300 km/hr, and the TGV Nord in 1993. The first routes in both Japan and France were undertaken as national (domestic) projects, meeting the need for intercity transport. UIC became involved very early on in the promotion of high speed rail. Louis Armand, initially in his capacity as SNCF chairman – and UIC chairman – had, since the 1950s, made network electrification and faster speeds a priority in the development of French railways (it was in fact under his chairmanship that the world records were beaten in 1955 by passenger trains hauled by CC locomotives). The speed of conventional passenger trains was raised significantly with the introduction of 200 km/hr services. Several named French trains, run from 1958 under the joint brand Trans-Europ Express (TEE), offered passengers such high speed services at up to 200 km/hr. As UIC secretary-general (a position he held from 1961 to 1971), Louis Armand embarked upon the promotion of high speed technology within the European and international railway community. For him, high speed represented one of the innovations which would enable rail transport to bring about a genuine regeneration, in the same way as developments in management and information systems (he particularly encouraged exchange on the prospects created by cybernetics and new information technology through international conferences organised by UIC).