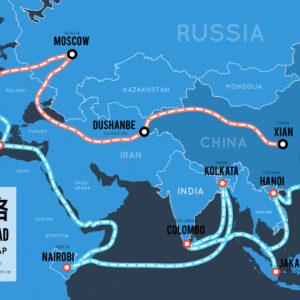 China is nevertheless keen to diversify its trading routes and in 2013 launched the project “One Belt, One Road”, aimed at stepping up connectivity and integrating trade routes with those of Eurasia. The project, which includes maritime and land components, as well as of course the New Silk Roads, is a major focus for the development of Chinese trade in the decades to come.

Rail is part of a continuum including sea, land and air transport. Aware of the advantages of rail transport but also of its limits, UIC has always advocated a policy of complementarity rather than direct, head-to-head competition as far as other transport methods are concerned.
The development of inter- and transcontinental corridors in Asia with the Silk Roads, but also in the Middle East and America, promotes this complementarity, sometimes referred to as optimodality, of rail with other modes of transport. The challenge is to create smooth interfaces between air, sea and land. This is the role of logistics hubs for the transport of goods or people.