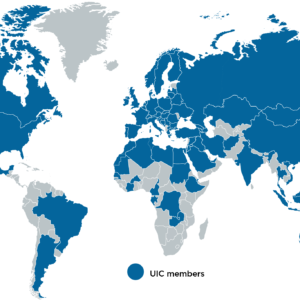 The geographical area covered by UIC has constantly expanded since 1922. Beyond the initial group of 51 members comprising the railways of Europe and physically connected regions – Near and Middle-East, the Maghreb and Asia (the core of “active members”) – UIC has gradually established cooperative links with railways on all continents, either directly or through the ministry with responsibility for rail transport or regional associations: Association of American Railroads in the United States, African Union of Railways and Arab Union
of Railways for example. UIC’s “family” now comprises 200 railway companies or railway administrations from 95 countries. Europe aside, all the main railway countries are represented.

For all these new types of rail company, be they public or private, complementing or in competition with one another, UIC serves as a single international venue for cooperation, where they can discuss technical issues, share experience and develop joint projects in a collaborative and neutral environment. UIC is open to all railway “professions”, as long as they wish to be involved in international cooperation and can benefit from working together.
The other key trend of internal development is the globalisation of the association, both in terms of its membership as well as its operation and activities. For 50 years or so, the UIC activities stemming from its initial mandate (harmonising and improving the establishment and operating conditions of railways with regard to international traffic) mainly focused on technical standardisation work aiming to achieve greater compatibility, or in today’s terms greater interoperability, “for transport by rail across a group of physically-connected networks.” This area of physically-connected networks, as it has been described, would broadly cover Europe and the neighbouring regions of the Near and Middle-East, the Maghreb, and a small part of Asia. The growing number of members and of the increasing amount of territory covered have led UIC throughout its history to question how to assert its global reach and adapt its range of services to the members of various continents.