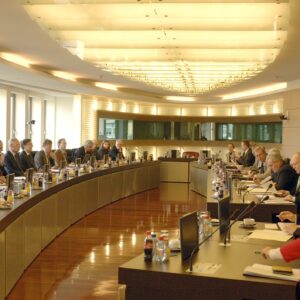 A Memorandum of Understanding (MoU) establishing the common principles of a certification system of the Entities in Charge of Maintenance (ECM) of Freight Wagons has been signed under patronage of the European Union, on May 14th 2009, in the premises of B-Holding, between 10 EU Members States.

This MoU follows on the work carried out between the European Railway Agency and the railway sector associations (UIC, UIP, ERFA, CER), in the perspective of the implementation of Directive (EC) No 20081110 amending Directive 2004/49 (EC) about Railway Safety. The MoU will allow the rapid deployment, on a voluntary base, between the signing Members States, of the principles that were defined for the certification of the ECMs, in anticipation of the full transposition of the Directive that establishes the mandatory character of the certification.

The railway sector welcomes this evolution, as it gives a very clear definition of the roles and responsibilities of the actors intervening in the wagon process, including the wagon keeper and the “user” (railway operator). The certification of the ECMs will help the latter to fully assume its own responsibility for the safety of the railway operations that has been bestowed upon it by the Safety Directive. The clarification of the maintenance framework might also help a smoother deliverance of safety certificates.

The signature of this MoU by the first Members States that have volunteered constitutes an important stage in the implementation of the principles of mutual recognition and of interoperability of the railway transport, on the backcloth of the evolution of the EU legislation and of the liberalization of the railway sector.

The Members States having signed the MoU on May 14th are: Austria, Belgium, France, Germany, Greece, Hungary, Italy, the Grand-Duchy of Luxemburg, the Netherlands and Romania. Member States like Slovakia and Slovenia might soon join this list.