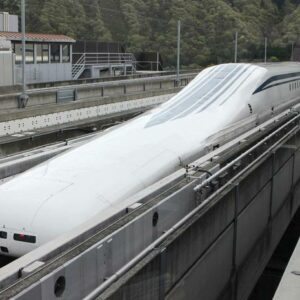 Japan’s maglev train broke its own world speed record just days after it broke its previous 12-year-old record. The seven-car magnetic levitation train set a world record on 21 April when it hit 603km/hour and maintained this speed for 11 seconds. The train beat the 590km/hour speed it had set the previous week in another test. The maglev hovers 10cm above the tracks and is propelled by electrically charged magnets.

Central Japan Railways (JR Central), which owns the trains, wants to introduce the maglev service between Tokyo and Nagoya, 286km away. The service, which would run at a top speed of 500km/hour, is expected to connect the two cities in 40 minutes, less than half the present journey time in a shinkansen, which celebrated its 50th anniversary last year.

By 2045 maglev trains are expected to cover the 410km between Tokyo and Osaka in one hour and seven minutes, cutting the journey time in half.

But estimates put construction costs at nearly € 91bn for the Tokyo-Nagoya stretch, with more than 80% of the route expected to go through costly mountain tunnels.